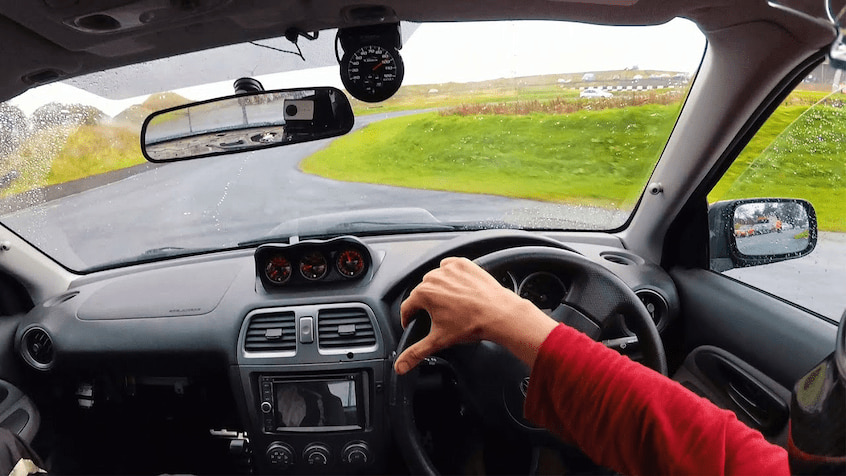 Posted at 08:07h in Automotive by Ian Tompson

Only two car manufacturers have boxer engines and permanent 4WD – Porsche and Subaru. And only Subaru has these as standard across all models. The combination oozes ample amounts of grip on all surfaces and lowers the centre of gravity of the vehicle, so stability in cornering is exemplary, setting the benchmark for both performance-oriented vehicles and those venturing off-road. Subaru goes one step further by bolting on a turbocharger in the WRX, WRX Sti and beefed up variants of its Forester SUV. This is tech derived directly from World Rally Championships, where the company had continual success in the 1990s.

Models geared more towards everyday driving, like the Liberty and Outback missed out on some of the fun. Earlier iterations of both cars included turbocharging, but this is lacking in current models. There are no insane bhp figures here, or seat-gripping top speeds. But if you want some of the appeals of pricer cars higher up the range, there are still options that get these mundane cars faster off a standstill. A subaru throttle controller helps better pick up speed in the naturally aspirated 2.5-litre flat-four and even tickles the 3.6 litre 6-cylinder to quicker 0-100 times.

The 1980s brought drastic changes to the auto industry. Electronics made their entry through the front door and changed cars forever. Computer-controlled systems like fuel injection optimised engine performance and reduced consumption. It also meant reduced weight, by getting rid of mechanical parts, that were slow to engage and often suffered from wear. Cars got faster, lighter and nimbler and with stricter emissions regulations, greener. It also paved the way for the inclusion of multiple systems centred around sensors that improved safety and driver and passenger comfort.

One such innovation was the throttle controller. This is the electrical device that is used to activate the car’s throttle. Earlier, mechanical systems relied on cables from the acceleration pedal wired to the throttle body in the carburettor. As you pressed on the pedal, the cables pulled on the throttle butterfly valve, essentially opening the throttle body to let air into the engine ready for combustion. With the advent of electronics, this is all now history. Electronic throttle controllers use sensors located atop the acceleration pedal and those in the throttle body to control how the car responds to driver input. The further down you press, the more voltage is read from the ECU controlling the whole assembly, and the quicker the car accelerates. Simple and effective.

The purpose of an aftermarket unit then is to bypass stock units with manufacturer set parameters that control how far down the throttle body opens. It does this by manipulating voltage output, tricking the ECU that the pedal is further down than it actually is. The result – quicker acceleration. There’s no inherent throttle lag, or the slight delay when just about nothing happens. Instead, the car instantly picks up speed.

How does a Throttle Controller Benefit Your Subaru?

Though cars like the WRX STI and its siblings are speed machines, the Outback and Liberty are more for leisurely driving. A throttle controller in these just adds a bit more fun. 0-100 in over 10 seconds isn’t what you’d call brisk, and in-gear acceleration can get you stuck in overtaking, with the CVT not the fastest transmission out there.

Better input from the controller means throttle lag is non-existent and this is what you can actually feel behind the wheel. It won’t replicate turbo engines, but there’s certainly a difference. While there’s no power added as such, there’s better use of that power. And this is helpful in several driving situations. There’s no jolting or jerkiness as you set off, and there’s no hesitancy or particularly loud droning in the CVT as it pushes the engine. Linear acceleration is what you get, and with the permanent 4WD, enough grip to handle any surface. For the Outback, this is especially important if you have a trailer or caravan attached at the back. Towing is safer as is overtaking, as you know exactly what the wheels are doing.

Adjustability and different modes are geared to different driver habits. Performance mode is what you what to improve throttle response, and here you have settings that make the throttle instantaneous, or just slightly faster than stock manufacturer settings. Most drivers go for something in between. Then, there are instances where you’d want to cut down on the throttle. Think of off-roading on loose surfaces, like gravel or sand, where too much wheel spin and no traction can get you in trouble. Set the subaru throttle controller to Eco mode, and there’s a more mellow reaction through the wheels. This too can be dialled up or down according to the conditions.

All controllers will also have an Auto-mode to replicate driver habits over longer periods. This is a set-and-forget setting, where the controller changes how responsive the throttle is according to your usual input through the pedal. Something you might want if you can’t be bothered with changing settings while driving.

Throttle controllers are easy to install, with the business part connected to the acceleration factory clip, bypassing the stock unit. The interface is small enough to sit happily anywhere along the dash, or where you deem fit. Operation requires a simple flick of the wrist and modes and settings can be changed while driving.

Throttle controllers are available direct from manufacturers, and all better-stocked automotive stores.